Roofers with up to three years' experience usually earn

Chances of getting a job as a roofer are good due to a shortage of workers.

Pay for roofers varies depending on experience, qualifications and location.

Those running their own business may earn more than this, but their income depends on the success of the business.

Roofers may do some or all of the following:

Roofers who run their own business may also prepare quotes and invoices for clients.

Roofers need to have:

If you’re more of a hands-on person, you shouldn’t hesitate to ask for help with the theory. I’ve made steady progress because I’ve got a good network of people.

Making friends with the roofers while working as a building labourer was the best thing Jack did for his career. "My job was ending and they said 'Why don't you jump waka and come with us?'"

Jack was offered an apprenticeship at Metalcraft Roofing that he couldn’t turn down. "I've got a family with three kids so I needed more certainty."

Jack's happiest memories involve teamwork. "Rotorua K-Mart was a huge roofing project. It was cool because all 11 of us were there. But more often we travel around the Bay of Plenty and work in smaller teams.

"I also like the way roofing is a physical job and you get to keep fit. And the challenges are rewarding too, especially making the flashings watertight on steep roofs."

Working hard can lead to more pay and responsibility

"You learn the basic roofing skills but then it's up to you to watch the site foreman and give it a go. If you put your head down and mahi (work hard) there is good money in roofing, and opportunities to learn.

"I'm at the stage now where I'm trialling a foreman’s role. I'm running my own jobs, and responsible for the workers and keeping the customers updated."

Your apprenticeship can take anywhere from a year to two years. It’s probably the best decision I made going for qualification. It’s opened a lot more doors for me. After getting qualified I’ve set up my own business and that’s been running for about eight months now and has done really well. My lifestyle has gotten a lot better because of roofing, I make real good money.

I think the type of person that makes a good roofer would be someone that really enjoys the outdoors, I guess they love physical work, love being practical, gotta love heights! Hopefully you love heights.

The demand out there for roofers now is huge. A lot of guys are looking for young roofers to start apprenticeships. I’d say to a guy wanting to become a roofer to go for it. It’s taken me places, I have enjoyed being an apprentice and I have also enjoyed being qualified now with my own business, so yeah, go for it.

There are no specific requirements to become a roofer as you gain skills on the job. However, many employers prefer to hire roofers who have or are working towards a qualification.

To become a qualified roofer you need to complete an apprenticeship and gain a New Zealand Certificate in Roofing – Installer (Level 4).

No specific secondary education is required for this job, but construction and mechanical technologies, maths and physical education to at least NCEA Level 2 are useful.

Year 11 and 12 learners can find out more about the construction industry, and gain relevant skills, by doing a National Certificate in Building, Construction and Allied Trades (Level 1 and 2) through the BConstructive programme.

Roofers need to be:

It helps to be good with heights because when you first start it can be a bit scary walking along 70mm-wide framing. But you learn how to keep safe with harnesses and safety netting.

Useful experience for roofers includes any work in the building and construction industry, especially plumbing and carpentry.

Roofers need to have:

Some roofing work has to be carried out or overseen by a Licensed Building Practitioner.

Chances of getting a job as a roofer are good due to:

The Christchurch post-earthquake rebuild is ongoing but most of the remaining work is in the non-residential (commercial) sector.

However, like many building jobs, this role can be affected by economic conditions. A downturn in the economy can lower demand for roofers.

The number of apprentice roofers has grown steadily but there are still not enough qualified roofers to meet demand. Around 80% of roofing apprenticeships are offered by members of the Roofing Association of New Zealand.

You can increase your chances of getting a roofing apprenticeship if you have:

According to the Roofing Association of New Zealand:

Experienced roofers may progress to set up their own business.

Roofers often specialise in either residential or commercial roofing, or a particular kind of roofing material, such as: 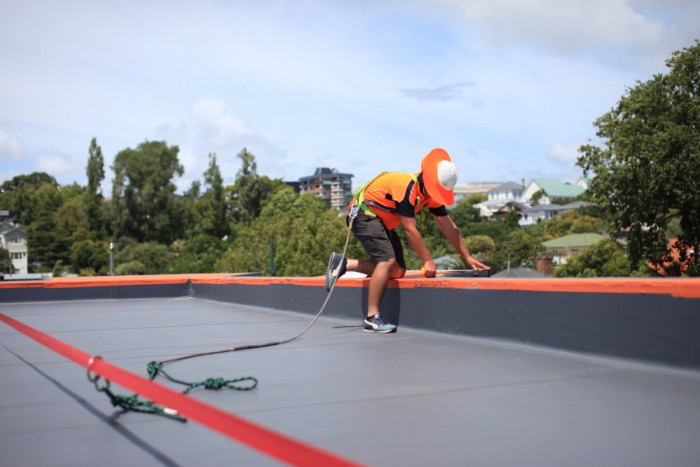 Building contractors run their own businesses and plan, supervise and work on the construction and alteration of buildings.

Building and construction labourers do a wide range of physical work on building sites, roads and other large civil construction projects.

Plumbers, gasfitters and drainlayers assemble, install and repair pipes, drains and fixtures and fittings that supply water and gas or remove waste.