Chances of getting a job as a metal worker are poor for those wanting to enter the role, but good for those with experience.

Pay for metal workers varies depending on experience, specialisation and employer.

Metal workers may do some or all of the following:

Metal workers need to have knowledge of:

Des Hansen began his career as a truck driver, but embarked on a metal working apprenticeship after deciding he needed a change.

Now 20 years into his career, Des works as a moulding supervisor at a foundry in the South Island. He and his team cast a variety of products such as engine blocks, alloys, irrigation fittings for underground water mains and compressor components.

"We mainly use steel, cast iron, ductile iron and aluminium here. The most we can cast is about one tonne, but you need some pretty substantial sand moulds to hold that. The chemically bonded sands are pretty durable though - when they set they're just like concrete."

All the hard work's worth it

Des admits that he works in some pretty tough conditions. "It's a heavy job and you definitely have to be energetic. Having strength and stamina is really important."

But he's quick to point out that the job has its up-sides too.

"It's pretty hard to describe a typical day here because it varies all the time, and every day presents a new challenge. It's just brilliant.

"The best thing is seeing a big, tricky casting going out the door and knowing you've accomplished something."

To become a metal worker you need to complete an apprenticeship and gain a National Certificate in Metal Casting – Technology (Level 4) through Competenz.

To become a farrier you need a National Certificate in in Equine (Farriery) (Level 4), which is gained through on-the-job experience and by attending block courses.

The three-year apprenticeship is run by the New Zealand Farriers Association, but places are extremely limited and depend on trainees being taken on by an approved and qualified farrier.

Metal workers need to be:

Metal workers need to have good eyesight (with or without corrective lenses). They also need to be reasonably fit, strong and healthy.

Chances of getting entry-level work as a metal worker are poor because:

Increase your chances of getting an apprenticeship

Although there are fewer entry-level positions available, a small number of apprentices are still taken on each year.

You can increase your chances of getting an apprenticeship by:

However, demand for experienced metal casting workers is good. This is because:

According to the Census, 171 metal workers worked in New Zealand in 2018.

Employers of metal workers include:

Metal workers may progress into supervisory or sales roles, or start their own foundries.

They usually specialise in an area such as:

Blacksmith
Blacksmiths shape metal by heating and hammering it. They produce or repair metal articles.
Electroplater
Electroplaters coat metal articles, and coat articles made of other materials with a film of metal.
Farrier
Farriers inspect, trim and shape the hooves of horses, as well as making and fitting horseshoes.
Metal Casting Worker
Metal casting workers produce original patterns and moulds that are used to make metal castings.
Metal Polisher
Metal polishers polish metals to give them smooth, reflective or other finishes. 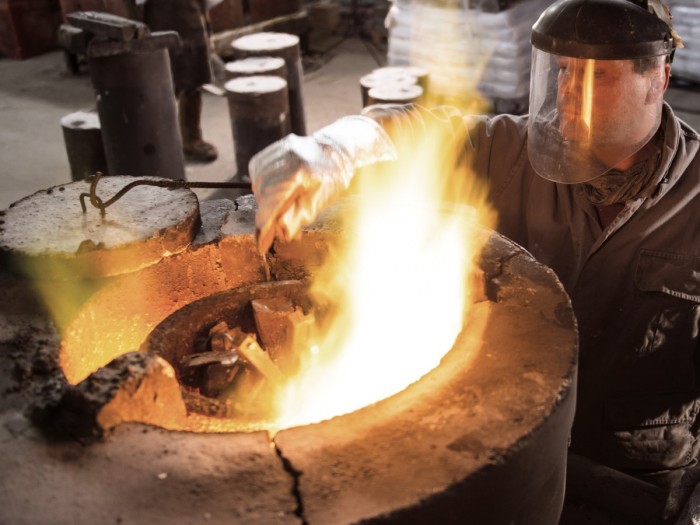 A metal worker heating and melting metal in a furnace