Chemists study the make-up and behaviour of chemicals, and may use their findings to develop new products and processes.

Chemists with a Bachelor's or Master's degree usually earn

Chances of getting a job are good for analytical chemists working in industry, but average for research chemists.

Pay for chemists varies depending on skills and experience:

Chemists may do some or all of the following:

Chemists who work with industries that manufacture chemicals may also do some or all of the following:

Chemists need to have:

"The variety of this job suits someone like me who has a relatively short attention span", says chemist Karla Anderson.

Karla specialises in plastics and paints, but says since working at Industrial Research Limited (now Callaghan Innovation), where there are various projects going on, she has had to adapt to working on diverse projects. "This variety is what I love most about it – it keeps me from getting bored!"

It's all about problem solving

As well as the variety, it's the problem solving that gives you a buzz, says Karla. "At the moment, for instance, we're looking at things such as wind turbine blades, trying to judge which material and mechanical structure has the highest strength.

"But last week, we were doing some consulting for a company that had problems with some housing panels discolouring. We figured out that it was the filler that was causing the problem."

Karla works on projects for a lot of people. She says that because everyone's work is the most important to them, they want it done yesterday. "My biggest challenge is trying to get them all done in a timely manner."

Hilary talks about her role as a process development chemist at Callaghan Innovation - 3.16 mins.

View transcript
Hello my name is Hilary, I’m a process development chemist at GlycoSyn, which is a part of Callaghan Innovation.

At GlycoSyn we get contract work from pharmaceutical companies to make new drugs for clinical trials. This involves working with a variety of different people including small scale research scientists from universities. What I do as a process development chemist is work on the scale-up part of that process. So this is learning how to make a molecule on a small scale, such as milligrams in a lab setting, and then scaling that process up to make it in larger and larger quantities, eventually up to a kilogram sort of scale in the pilot plant.

Some of the challenges involved in scale-up chemistry relate to the fact that as you scale things up, processes such as mixing and heating change at a larger scale. You can think of this like when you’re baking a cake. When you double the size of the mixture, then you have to mix it even better to make sure that all the ingredients are combined appropriately. And you don’t simply double the time that you heat it for, because it also depends on how good your oven is and the size of the cake tins that you’re using.

I’ve always been interested in chemistry and science and how things work. So I decided that was what I wanted to do as a career after studying a Bachelor’s degree in chemistry and maths. It was the chemistry that really appealed to me because of the real life applications, and the potential to really help people and make a difference in the world.

I got my first chemistry job after I did my honours. I decided that I needed a break from study and wanted to get some more real lab experience and real life experience. I worked as an analytical chemistry technician for a year, which I really enjoyed, and in that time I learnt lots of new skills.

When I was studying my PhD, my research was about making drugs for tuberculosis in greener and more environmentally friendly ways. One of the cool things that I discovered while doing this, was in the process of making a whole library series of molecules, I discovered some that were really good at killing the bacteria that causes tuberculosis. So this was a really exciting finding that I had.

Some of the coolest things about being a chemist for me is that I get to spend a lot of time doing things with my hands, and working in the lab doing purifications and reactions. I also find the problem-solving aspect of the job really satisfying. You don’t always get successful experiments. So to be able to be a great scientist you need to have perseverance and persistence to continue on with a project that may be quite challenging.

To become an assistant chemist you need to have a Bachelor's degree in chemistry, biochemistry or a related science.

To become a chemist you need to have a Master's degree in chemistry, biochemistry or a related science. However, a PhD or further postdoctoral study are often preferred.

A tertiary entrance qualification is required to enter further training.

Chemists need to be:

Useful experience for chemists includes laboratory work as a technician, or other scientific research work.

Chemists need to have good eyesight (with or without corrective lenses) and good hand-eye co-ordination.

Analytical chemists are in high demand in industries such as health and wellness to test raw materials and finished products before they are produced on a large scale.

There are fewer positions for research chemists because more new product research is being done overseas.

According to the Census, 615 chemists worked in New Zealand in 2018.

Industry experience as an assistant chemist improves your chances

You can increase your chances of getting work as an analytical chemist if you have experience as an assistant chemist:

Chemists work for a variety of employers including:

Chemists may progress to jobs in areas such as:

Chemists can specialise in a number of roles, including:

Analytical Chemist
Analytical chemists determine the structure, composition and nature of substances. They help pharmaceutical industries identify compounds that can be used in drugs, and also identify chemical pollutants in air, water and soil.
Biochemist
Biochemists study biology and chemistry.
Inorganic Chemist
Inorganic chemists study chemical compounds other than those in living things.
Materials Chemist
Materials chemists study, develop and improve materials such as plastic.
Organic Chemist
Organic chemists study the chemical compounds that make up living things. They mix these chemicals to create new compounds, which are used to develop products such as drugs or plastics.
Physical Chemist
Physical chemists study the physical characteristics of atoms and molecules in chemicals. Their research may result in new and better energy sources. 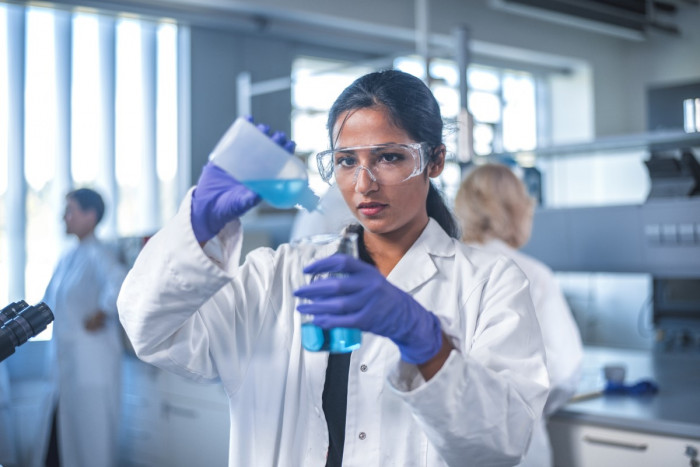 Chemists perform experiments to test the behaviour of different chemicals

Biochemists study the chemical structure and function of animals, plants and micro-organisms such as bacteria and viruses. They use this research to develop medical, industrial and agricultural products.