Chances of getting a job as a lift technician are average due to small job numbers, but there is a high demand for workers.

Pay for lift technicians varies depending on experience and responsibilities.

Lift technicians may do some or all of the following:

Lift technicians need to have knowledge of:

Scott McNab originally wanted to become an electrician, but ended up taking an electrical wiring apprenticeship with an elevator company instead. "That was fortunate for me, because I got to work with electrical equipment that a normal electrician might not be exposed to."

Not knowing what the day will bring

A typical day for Scott consists of a number of routine maintenance visits to elevators around town – this means checking all the safety switches, rollers, and emergency lights in the lift. He also gets called out to breakdowns and to rescue people stuck in lifts.

"That's one of the great things about this job – you don't know what's going to happen when you get up in the morning. It's not like you're rocking up to the same desk, same chair and same computer every day."

Scott says it can get a bit stressful when jobs come in one after the other, but adds that fixing a troublesome or reoccurring problem more than makes up for it.

"It's great when you manage to nail a problem that other people have had a go at and haven't been able to fix.

"It's also satisfying to look after a piece of equipment and make sure it runs as efficiently as it can with minimal breakdowns – it gives me a great deal of pride."

There are no specific requirements to become a lift technician.

However, employers may prefer you to be qualified as an electrician, engineer or mechanic.

No specific secondary education is required for this job, but NCEA Level 2 English, maths, physics and technology are useful.

Lift technicians need to be:

You don't need to know how every nut and bolt works, but you need to have a basic understanding of how a lift operates.

The overall demand for lift technicians is average.

Lift technician is a small occupation but they are in high demand due to:

Most lift technicians work in the major cities, where there are more high buildings with lifts.

If you are unqualified, the best way to get a job as a lift technician is to approach a lift company and say you are interested in being taken on as an apprentice.

According to the Census, 240 lift technicians worked in New Zealand in 2018.

About 15% of lift technicians are self-employed.

Lift technicians may move into lift consultancy, subcontracting work or other electrical-based occupations. 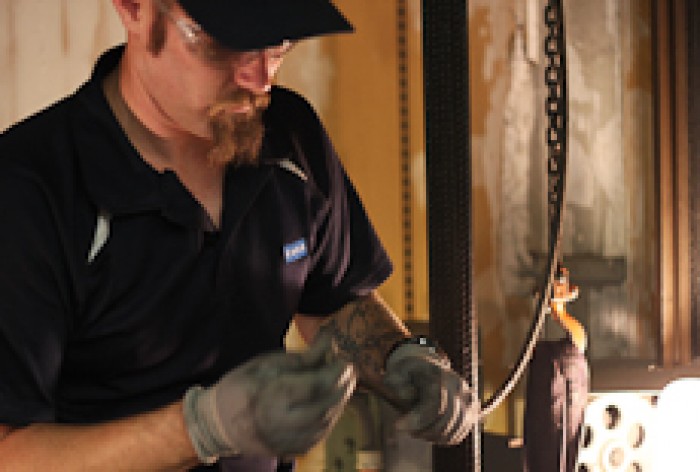 A lift technician on the job

Electrical engineering technicians interpret the designs and technical instructions of electrical engineers, then ensure they are accurately carried out. They also develop, install, test and maintain equipment that produces, transmits or uses power.