Brewers use brewing equipment and processes to convert malted barley or other grains into beer, and control or manage the production and packaging of beer.

Chances of getting a job as a brewer are average for those wanting to enter the role, but good for those with experience.

Pay for brewers varies depending on experience and location.

Brewers may do some or all of the following:

Brewery workers need to have knowledge of:

Wellington brewer Zane Piercey worked for a liquor distributor in Canada when he was 18. He got to know a delivery driver of a craft brewery which eventually took him on as a general labourer.

Zane eventually came to New Zealand and started working in a smaller brewery in Wellington before moving on to work at Garage Project about six months later.

His advice to new brewers? "Don’t be afraid to stay an hour or two late, and get really dirty and soaking wet. You have to understand that working at a brewery isn't easy, and won't involve much relaxing."

Shifts and types of work vary

Zane switches between early and late shifts during the week.

Early shifts start at 6am and involve checking tanks of fermenting beer or monitoring and sampling things like sugar content and pH levels.

Late shifts start at 2pm and involve either taking over the morning brew or transferring beers into different tanks, or packaging.

Zane says there’s always something to clean or fix in a brewery, and the work can be physically demanding. But he enjoys other aspects. “The longer I’ve been in the industry, the more I’ve become interested in the scientific side, and quality control.”

“We all taste the beer we’ve brewed or packed over the week and make sure everything is tasting okay."

There are no specific requirements to become a brewer. However, employers often prefer you to have a qualification such as a:

Brewers at independent breweries are less likely to need a qualification than at large breweries.

To gain further qualifications, such as Master Brewer (MBrew), you must be a member of the Institute of Brewing and Distilling to sit the required examinations, and have relevant experience.

While working, brewery assistants may gain:

A minimum of three years of secondary education is recommended. Useful subjects include maths, biology, chemistry and processing technologies.

Brewers need to be:

Brewers need to have good hand-eye co-ordination and be reasonably fit and strong, as they may need to lift kegs or other heavy objects.

Brewers must also be comfortable working in confined spaces.

The number of workers at breweries that produce mainstream beer is continuing to drop due to increased automation. However, the number of independent or craft breweries is growing to meet increasing demand in New Zealand. Increased production of craft beer is creating more brewer, assistant brewer and brewery assistant jobs.

Brewers may have more of a chance at securing a job if they apply at independent breweries.

Chances best if you have experience

Employers report difficulty finding skilled brewers, so your chances of securing a job are best if you have relevant experience.

Brewers may work for large or independent breweries. Lion Pty Ltd and DB Breweries Ltd are the largest beer producers in New Zealand.

As large breweries have automated brewing processes,they have few traditional brewer roles. For example, there are just 13 brewers employed at DB Breweries.

Independent or craft breweries usually have teams of up to 20 brewers who share a variety of different responsibilities.

Brewers may progress to set up their own breweries or become managers of breweries.

Brewers in large brewery companies may specialise in one area of the brewing industry such as production or laboratory work. 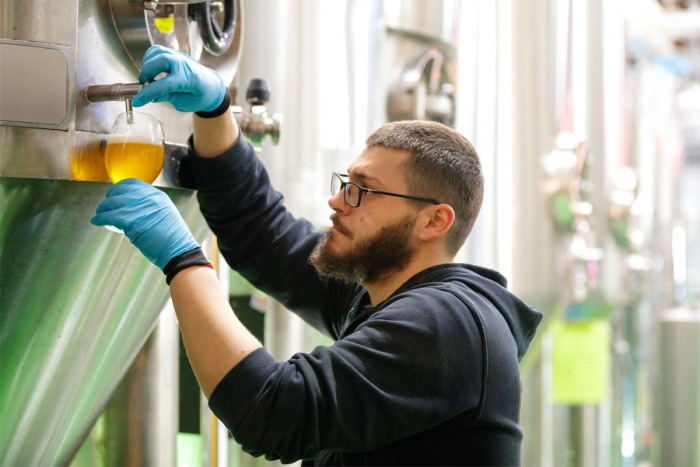 Biotechnologists use their knowledge of living things to develop new animal or plant products such as medicines and pest-resistant crops.

Food technologists research, develop and improve food and drink products. They may also be involved in the processing, packaging, storage and safety of food to meet government and industry standards.

Winemakers make wine from grapes and other fruit.