Biotechnologists use their knowledge of living things to develop new animal or plant products such as medicines and pest-resistant crops.

Chances of getting a job as a biotechnologist are good due to increasing demand for their services.

Pay for biotechnologists varies depending on qualifications and experience.

Biotechnologists may do some or all of the following:

Biotechnologists need to have:

The most satisfying part of Tanvi Karnik's job as a medical biotechnologist is seeing the positive impact of a treatment she’s helped develop.

“It’s exciting seeing patients with wounds they’ve had for years, like diabetic ulcers, make good progress after a few weeks.”

“My focus is on understanding the microbe populations in the wound dressings to ensure they’re at levels safe enough for use on patients.

“It means a lot of routine testing and monitoring every stage of an experiment. You keep your eyes open for the unexpected because every failed experiment is a chance to learn more.”

An interest in the biological sciences led to Tanvi getting her Masters in biotechnology. “I chose biotechnology because I wanted to work with new techniques and reach out to a lot more people."

She says networking is key to entering the role.

"You need to find the area of biotechnology you’re most interested and connect with people in industry to get experience."

Logan Williams talks about life as a director of technology and innovation – 1.54 mins.

View transcript
Logan: When people think of scientists, they think of boring nerds playing around with chemicals in a laboratory. This could not be further from the truth. I'm here to tell you that scientists are trying to solve some of the world's biggest problems right here in Canterbury.

In fact, I'm the director of technology and innovation for the New Zealand Merino company. We're tackling the synthetic industry with natural materials.

My generation, your generation, have been given a really bad hand of cards. We're facing some pretty serious problems that actually could threaten humanity. It's now more than ever we need scientists to lead the way. I think it's in every single one of us. It's in our culture so it's actually in our DNA as New Zealanders to come up with these amazing solutions to pretty much unforeseeable problems.
A major part of that now is taking that culture and channeling it, taking that next step, and having a broader international impact.

When I went to Canterbury University, I was surrounded by people very similar to me. I love it. I was in my element. Now I'm looking far bigger picture, like, when I come up with an invention I want to make a system and incorporate it and actually have a wider impact and I think that's where New Zealand Merino and what I'm currently doing with the wool, because we can actually go into the industry and replace plastic.

You may be sitting on your couch or in your bedroom looking at this and thinking, 'I could never be a scientist, I'm not smart enough or I can't do it', but that's outright wrong. In fact, once you learn the basics of science and the process it's actually quite simple. If you can specialise in science and be surrounded by amazing people, that's the key to success. So don't sit there and think you can't do it because you definitely can.

To become a biotechnologist you need to have a Bachelor of Science, Engineering or Technology in one of the following:

However, many employers prefer to hire biotechnologists with a Masters or Doctorate in biotechnology or a relevant field.

Biotechnologists need to be:

Biotechnology is a growing field, especially in the agricultural, environmental, food and medical industries.

Biotechnologists are needed to develop:

According to the Census, 102 biotechnologists worked in New Zealand in 2018.

Chances best for those with experience

Your chances of getting a job are best if you have: 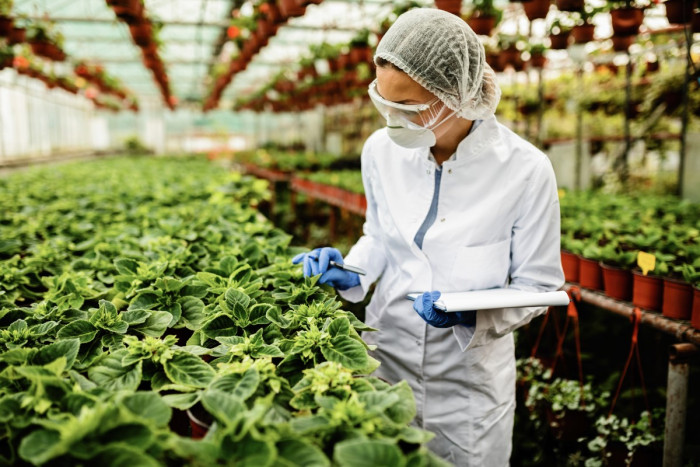 Biotechnologists monitor the growth of plants during experiments

Biochemists study the chemical structure and function of animals, plants and micro-organisms such as bacteria and viruses. They use this research to develop medical, industrial and agricultural products.

Food technologists research, develop and improve food and drink products. They may also be involved in the processing, packaging, storage and safety of food to meet government and industry standards.

Other Natural and Physical Sciences