Chances of getting a job as a sound technician are poor due to lack of demand.

Pay for sound technicians varies depending on skills, experience and the type of work they do.

Many sound technicians are self-employed and work on short-term contracts.

Sound technicians may do some or all of the following:

Sound technicians need to have:

Andrew Downes never planned on becoming a recording engineer, but 30 years after he “fell into” the job he can’t see himself ever doing anything else.

“I don’t really see being a recording engineer as a job, I think that’s what I enjoy most about it. I’ve managed to find something that if I wasn’t doing for a living, I’m pretty sure I’d be doing as a hobby.”

No such thing as a typical day

“There’s no such thing as a typical day for me. I might be editing sound files, or mixing audio, or I might have to travel somewhere for a recording session. I tend to spend a large amount of time soldering and fixing broken equipment as well.

“I also spend a bunch of time watching videos to get new skills on how to use new versions of software or finding out about new hardware and similar things. So I count that as being an important part of my work.”

It’s important to be self-motivated, patient and persistent

“You have to be very self-motivated and patient because, like any career in the arts, there’s a lot of rejection. You’ve got to be persistent.”

Dave Whitehead talks about how he became a sound designer/composer – 4.16 mins.

View transcript
Dave: I do sound design for film and started off doing sound editing. I guess the thing is when you're working in sound it covers music, it covers sound effects, it covers that sort of thing.

I actually started doing theatre sound first, so making sound effects for little theatre productions and then writing music for little children's-pantomimes, and things like that, so it was pretty basic stuff.

And then I went to a careers guys and he told me about theatre and television and that sort of thing. So it was actually my guidance counsellor at school who told me to head down that path.

Anyway, so theatre soundtracks, doing sound effects, and then started doing short films. Now the thing is if anyone really wants to get into doing pretty much anything in film, I would say start with a short film and there are people at the polytechnics, there are people at universities, people at film schools that need sound, or that need art department, or that need people who are creative to come in and work on those projects and make them great.

And so the thing is look at short films, because they are the building blocks, and I've done maybe 30 or 40 and I still do them now, and I'm about to shoot my own first one, so it's like things move from one thing to the other.

But start small and I think it's a better thing... I'm mean feature films are huge and if you work on a short film and it gets noticed by someone who works on a feature film, or the director that you did the short film for becomes famous and has a feature film, all of a sudden you're in a different ball park and you will have a career that might open up into feature films.

There's a lot of times where you don't have incoming money, so it's good to be diverse. So the thing is the film industry there might be a film shooting for four, five, six months and then it will... be a break of a couple of months where you've got to hopefully store your pennies, but it is a good industry to be in so don't be dismayed by that whole thing, but there might be times when you have to borrow some food money from your parents, but it's a good career.

Sound design, sound effects editing, dialogue editing, foli artist, music producer - all of those things, they're all in the same sort of park and all of them just require you to sort of, chip away at your skill sets.

So start small - play your guitar, get it sounding good. If you're shooting a little film on a hand-held video, just put a little fluffy thing on the end of your microphone so that it doesn't all sound horrible.

Look online at advice from people such as myself or other people and use that as your resource to try and move your career ahead, but just small steps, small steps. Do something every day to get to what you want.

It's okay to be scared of what you're going to do. Like it's actually a prerequisite to doing some creative job. But embrace that fear of what you're going to do because you don't know if you're going to be able to pull it off and you've got to try and pull something out of thin air to make something work, but that's part of the process, it's part of that whole kiwi ingenuity thing - if someone from overseas is watching this, it's the the same thing as well - where ever you are, use what ever you have within in your grasp to try and propel yourself forward. To get to the top of what you do...I don't know if there is a top, you know, and I don't think you're striving to do that. What you're trying to do is try and get your voice out there, because your voice is important, you know, it's important for anyone to hear what you have to say, because it might be what we all need to hear.

There are no specific entry requirements to become a sound technician as skills are gained on the job as a sound assistant. However, you usually need:

There are no specific secondary education requirements to become a sound technician. However, music, dance, and drama, digital technologies, media studies, English and maths are useful.

Sound technicians need to be:

You've got to be patient. While you’re employed by people, you’re also working with them and everybody works at different speeds.

Sound technicians need to have excellent hearing. They also need good stamina as they may have to stand at a sound desk for long hours.

It is difficult to get paid, full-time work as a sound technician due to the small size of the entertainment industry in New Zealand.

The COVID-19 pandemic has further reduced opportunities for sound technicians.

Demand may improve slightly as restrictions to control the spread of the pandemic ease.

According to the Census, 546 sound technicians worked in New Zealand in 2018.

Sound technicians work for a wide range of organisations. They may work at:

Sound technicians may progress to become production managers or to run their own business. 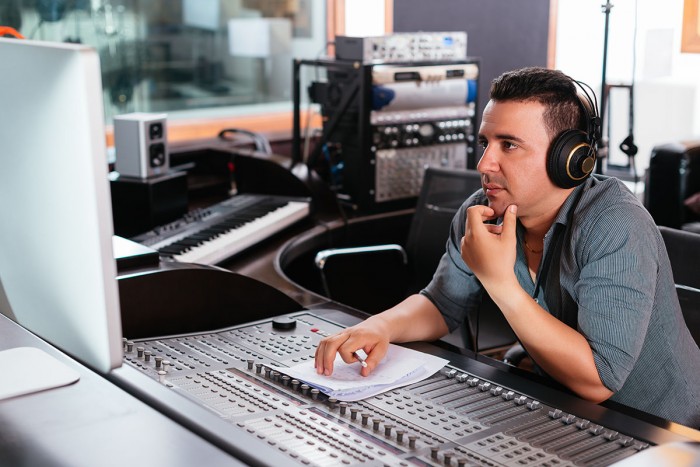 Radio presenters introduce music, and present or host programmes on the radio.

Lighting technicians set up and operate lighting equipment to provide light and special lighting effects in theatres, at events, and for film and television productions.