Chances of getting a job as a film and video editor are poor due to strong competition for limited vacancies.

Film and video editors usually earn between minimum wage and $100,000 or more a year.

The Directors and Editors Guild of New Zealand recommends that editors working on film and television productions be paid a rate of $2,600 per week.

Film and video editors may do some or all of the following:

Film and video editors need to have:

Jonno Woodford-Robinson started out wanting to be a sound engineer, but it didn’t take long before he knew that film and video editing was the right career choice for him.

What does a typical day look like for you?

“During the shoot, I look at what I worked on the previous day, make any obvious changes, and then start cutting scenes from the latest rushes (footage).  Hopefully I get most of that done by the end of the day.

“After the shoot, there's the director's cut, which changes from film to film depending on the director. Most directors stay for some of the edit and leave you to work on other scenes by yourself before checking back later. Then we’ll delve into it a bit more together.”

What’s one highlight from your career so far?

“Even though it was done in collaboration with other editors, I really enjoyed working on the feature film What We Do in the Shadows, and watching it with an audience at the Sundance Film Festival in Utah, USA. Hearing the cinema audience laugh at a comedy I've worked on is such a buzz!”

What advice would you give someone wanting to become an editor?

“Watch your favourite films several times in a day or a week and consider why the director and editor decided to cut to particular types of shots. Why might you understand what's going on in the film more clearly because of those decisions? It's also good to discover why an inferior film isn't so great – what did they do wrong?

“It’s also worth reading In the Blink of an Eye by Walter Murch, Screenwriting - The Sequence Approach by Paul Joseph Giuliano and On Directing Film by David Mamet.

“Also, offer to help out editorial crews on short films. This usually means little or no pay but it helps prove to people in the industry that you really want to be an editor.”

Marcus Brill talks about working as a video editor and motion designer – 2.27 mins

View transcript
Marcus Brill: This is a creative agency so, of course, we've got lots of cool things like this car in our lobby. Hi, I'm Marcus, and I am an editor and motion designer. Welcome to my Day In The Life.

What gets me excited to go to work everyday? It's coming up with funny ideas and then making them and then having people laugh at them.

So the 3 main things I would do in my job is reading briefs, editing footage and animating graphics.
So this is a timeline and this is where I'm gonna build our sequence. This is all about footage. As you can see, you can quickly take all your footage, get it on a timeline, and start building a story out of it.

My path, I ended up going to university and studying a Bachelor of Arts and Design. The best thing I took away from university was the ability to generate ideas. Ideas that people can relate with; how to take an idea from a concept and make it into something.

So I've been editing for about 5 years. When I first started, I didn't know that much about motion graphics. I knew I enjoyed doing it and just through trial and error, I picked up a few skills. But as I got better and better, I realized how little I actually knew. The company I worked for put me on a course. It was sort of like a 10-week online course that sort of solidified all the little bits that I knew and it filled in all the gaps that I didn't know to give me a really solid foundation in using after effects and motion design.

I'd say the majority of editors in this industry are contractors or freelance, which means they can be working here 1 day or they can hustle and get their own work.

If you've ever heard of anything called imposter syndrome, being in a place where you're surrounded by super talented people can be quite off putting in a way because you're battling with yourself thinking, they're gonna figure out that I'm not a real editor, when in actual fact, a lot of those people are going through the same thing.

Honestly, I don't really think about my paycheck so much. The reward for me is when someone goes "Oh, that's cool, oh how'd you do that? That's awesome". I love making things, basically making things that people appreciate.

Experience in the entertainment industry and proven ability are essential.

There are no specific secondary education requirements to become a film and video editor. However, media studies, digital technologies, design and visual communication, music, dance and drama, English and te reo Māori are useful.

Film and video editors need to be:

Offer to help out editorial crews on short films. This usually means little or no pay but it helps prove to people in the industry that you really want to be an editor.

Chances of getting a job as a film and video editor are poor as the entertainment industry in New Zealand is small and there are many graduates with suitable qualifications.

Most people enter the industry through an entry-level role, such as assistant editor, to gain experience and get known.

According to the Census, 588 film and video editors worked in New Zealand in 2018.

Essential to build a portfolio

It is essential for film and video editors to demonstrate their experience and ability with a strong portfolio of previous work. Working on low-budget short film productions with other graduates is a good way to develop skills and build your portfolio.

The best way to enter the industry is to contact employers directly and widen your networks by attending industry functions and conferences.

Most film and television production work is centred in Auckland and Wellington.

Film and video editors may work independently, or for production companies or advertising agencies. They may work on:

Film and video editors may progress to become directors or media producers.

Film and video editors can specialise in these roles:

Offline Editor
Offline editors assemble recorded scenes to form a whole film or video.
Online Editor
Online editors improve the technical quality of the work by fine-tuning the colour grade, improving any special effects, and making sure the work is ready for broadcast. 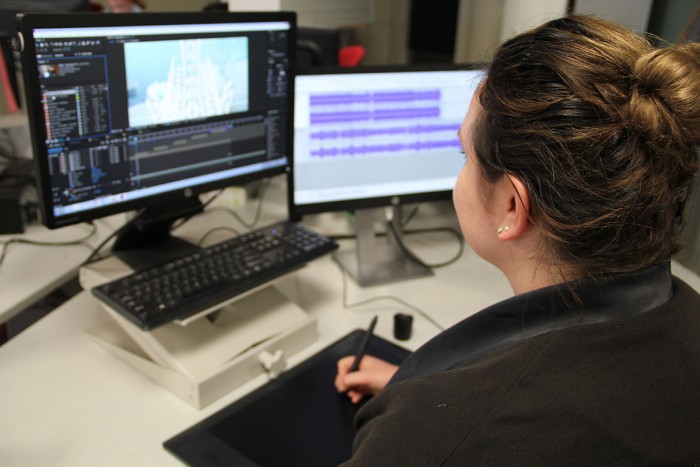 Journalists research and produce stories for websites, print, radio, television and other forms of media for social and commercial purposes.