Aircraft loaders load and unload aircraft, and transfer freight and baggage between airport buildings and aircraft.

Chances of getting a job as an aircraft loader are average due to declining job numbers, but reasonably high turnover.

Pay for aircraft loaders varies depending on experience.

Aircraft loaders may do some or all of the following:

Aircraft loaders need to have:

Richard Jones's career has swerved between planes, trains and automobiles. While currently working as an aircraft loader, his CV also includes locomotive engineer and courier driver work. He only intended to be a loader for a short time, but he now has six years up his sleeve and no intention of leaving.

"You get travel perks, the money's reasonable and it's low stress. I also love being outside – on a nice sunny day, when you're in your shorts in the sun, it's great."

"Physically it's challenging. You get injuries and they are hard to heal. Muscle tears in our shoulders are common because we're lifting above our shoulders. But that's the nature of the work, so you just have to try and keep on top of it."

What's an important skill to have as an aircraft loader?

"We have to work as a team, as things can get really busy and we have to depend on each other to get things done. Everybody has to know what they're doing."

There are no specific requirements to become an aircraft loader. However, a New Zealand Certificate in Aviation (Ground Handling) may be useful.

There are no specific secondary education requirements to become an aircraft loader. However, construction and mechanical technologies, physical education, maths and English are useful.

Aircraft loaders need to be:

Aircraft loaders need to be reasonably fit and strong, with strong backs and good stamina, because they need to lift heavy items. They also need to be able to bend, stoop and work in tight spaces.

According to the Census, 1314 aircraft loaders worked in New Zealand in 2018.

People often get into aircraft loading by doing casual or part-time baggage handling. Casual or part-time positions are available throughout the year, though summer can be a good time to apply as airlines are usually busier then.

Most aircraft loaders work for one of two companies

Aircraft loaders either work directly for Air New Zealand, or for companies that supply contractors to airlines.

The largest of these companies is Menzies Aviation, which supplies aircraft loaders to many airlines.

Aircraft loaders may progress to work as team leaders or managers. 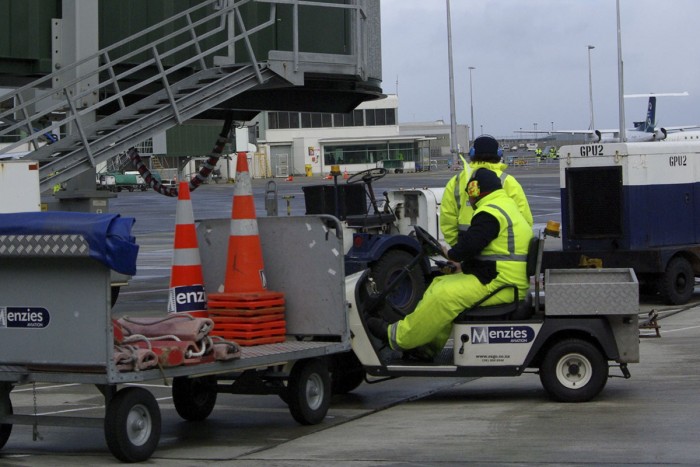 Forklift operators operate vehicles that have a lifting platform for shifting and stacking heavy articles such as pallets, bales, crates, containers or cartons.

Furniture packers/movers pack furniture and equipment and move it between households, offices and storage places.

Stevedores operate a variety of heavy machinery to load, unload, tally and stow the cargo of a ship.