Chances of getting a job as a game developer are poor for those wanting to enter the role, but good for those with experience.

Pay for game developers varies depending on experience and skills.

Game developers may do some or all of the following:

Most game developers specialise in a particular aspect of game design.

Game developers need to have knowledge of some or all of the following:

Luba Miteva gets paid for what others do in their leisure time – playing video games.

Luba is one of nine game software testers working for Wellington developers Sidhe. "I feel pretty lucky; some days I have to pinch myself."

Spotting the bugs and making sure the game works

But testing a game involves more than just playing it. Luba ensures all the games' features and graphics are doing exactly what they're designed to do.

"You need an eye for detail. Some bugs are big and easily spotted, but others are harder to see.

"We are usually working off a test plan and checking one particular thing at a time. There’s internal tracking software that we use and every time you find something wrong, or not where it’s supposed to be, you have to log the faults consistently and clearly."

It’s a great job but there are deadlines to meet

Luba, who has a Diploma in Software Development, loves her job, though it often involves working late. "Everything we do is on a really tight schedule so some weeks there are crazy amounts of overtime. But I don’t mind because it’s an awesome job."

To become a game developer it is essential to have experience of video and computer games.

To become a game programmer, you usually need a Bachelor's degree in computer science, software development or engineering.

Many university degrees have papers specialising in game programming or interaction design, and opportunities to make a game as a project.

Game artists and designers need to showcase their work

To become a game artist or designer you need a portfolio of your work or a showreel of games you have built (including online or board games). Some knowledge of programming is also an advantage.

Employers may also prefer you to have a degree or diploma in:

A tertiary entrance qualification is needed to enter further training.

Game developers need to be:

Game developers spend a lot of time using computers and gaming consoles, so they need to know how to use computer equipment properly to avoid occupational overuse syndrome (OOS).

For those with experience, chances of getting a job as a game developer are good due to:

About 600 game developers worked in New Zealand in 2017, but this isn't enough to meet demand. Game programmers, artists and designers are the most in demand.

As a result, a number of game developer-related jobs appear on Immigration New Zealand's long-term skill shortage list. This means the government is actively encouraging skilled game developers in these categories from overseas to work in New Zealand.

Game developer-related jobs on the long-term skill shortage list include:

Your chances of getting a game developer job as a new graduate are best if you have a specialist game development qualification, as competition is high.

New Zealand has about 30 game development companies, with staff numbers ranging from fewer than five, to 100 or more.

About one third of game development employees are game programmers, 28% are game artists, and 10% are game designers.

Game developers may progress to set up their own game development or software business, or move into management roles.

Game developers usually work in one of three areas – game programming, game art design or game design. Within these areas, they may specialise in a particular aspect.

Game programmers may specialise in:

Game art designers may specialise in:

Game designers may specialise in:

Game developers may also specialise in: 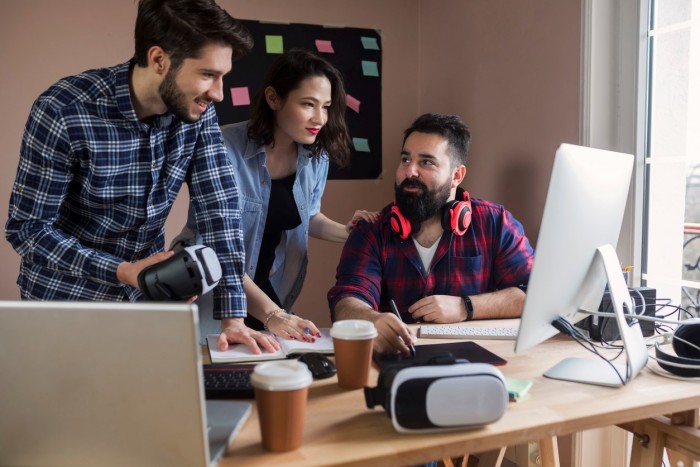 Animators and digital artists use software, models, photography and drawings to create still and moving images for advertisements, film, print, web or television.

Graphic designers create artwork or designs for published, printed or electronic media such as magazines, brochures, television advertisements and websites.

Test analysts design and carry out tests for computer software and systems, analyse results, and identify and report problems.